It would be fair to say us bikers are a superstitious bunch, we all have quirks we either do or say on the road. But did you ever wonder where some of the come from? Our top question in store is about our collection of ride bells, what are they for? Where did they come from and who needs them?

In a land of wisps, myths and legends it’s not hard to see why Rider Bells are one of our most popular gifts among our rider Clan. The legend of the “Ride Bell” or “Guardian bell” stems right back in time, before motorcycles and cars in fact. Long ago, as far back as 1488, it has been documented that bells were often used to get rid of unwanted demons and gremlins who would cause havoc in the home, messing with pots and pans, and moving things from where they were left last. “Devils can’t abide o’bells” recalls a folklorist in 1862 – so, when one lonely night long ago an old grey bearded biker was heading home along a deserted road, carrying trinkets and gifts in his saddlebags for his family and village, he was surely lucky that some of those gifts were small bells.

As he approached an open stretch, he listened in to the purring motor, and thought about the many trips they’d made across the land. The bike was a faithful thing, they’d seen all weathers and still come through safe enough, in truth they’d bonded as man and machine over the years and miles. The road started to narrow, and he came upon a wooded section, the trees drawing close to the road, little did he know this was the dwelling spot of some mean road gremlins! For sport in past times, the road gremlins used to spook horses, but in this day and age, they preferred bikers and our chap was intended as their next victim. In the blink of an eye, they set upon the biker, hopping on the bike, twiddling wires and fuel lines, causing the bike to weave and swerve, bringing the biker to a wobbly stop and dropping the bike.

The old biker was furious, he ran round to his saddlebag, which the gremlins had ripped from the bike, and started throwing things at the gremlins – which delighted them further – until he reached one of the bells. As soon as a tiny tinkle was heard, the gremlins threw their claws to their ears, and screeched in pain. Spotting this, the biker reached for the others, shaking them with all his might ad the gremlins jumped about and scattered in sheer fright.

Returning to his bike, laid over by the side of the road, the biker tied a handful of bells to his bike, collected the scattered gifts and put the saddle bag back onto the bike. Up righting it, with a few strong kicks, it surely and faithfully came back to life and before he knew it he was on his way home. Later that week, resting in his local bar, he began to explain where the extra scrapes on his bike had come from to his fellow biker buddies. And in telling the tale, he gifted bells to each one to tie to their bikes so they wouldn’t befall the same fate as he did that night. So, if you receive or give a bell, be sure you’re receiving a gift of friendship and care from another biker.

A tradition, a superstition or folklore, a bell can make a wonderful, memorable gift for the biker in your life  - shop for ride bells here.

It’s pretty easy to get drawn into work these days, so to break the norm oor Bruce suggested an intrepid run out on the road after work. I think we’re pretty lucky to have some awesome roads on our dealership doorstep and the route Bruce chose for Don, Will and I didn’t disappoint! From West Coast to Aberfoyle, over the Duke's Pass to Callander.

Our chosen Milwaukee-Eight powerhouses were the Low Rider S, Fat Bob, Road Glide and Fat Boy, which took every twist and turn in their stride, and although we had set off in balmy evening sun, it got misty over the pass and the temperature dropped off. I was extremely thankful to be wearing my FXRG gloves and Stag neck tube for sure!

With a brief stop in Callander and as a sign of the times, with no coffee in sight, we headed back to Glasgow. Thankfully as we passed Lennoxtown the sun came back and we got to ride into our beautiful city in the same blissful sun we’d left behind. As I parked the Fat Bob up, I couldn’t help but think that West really is best! 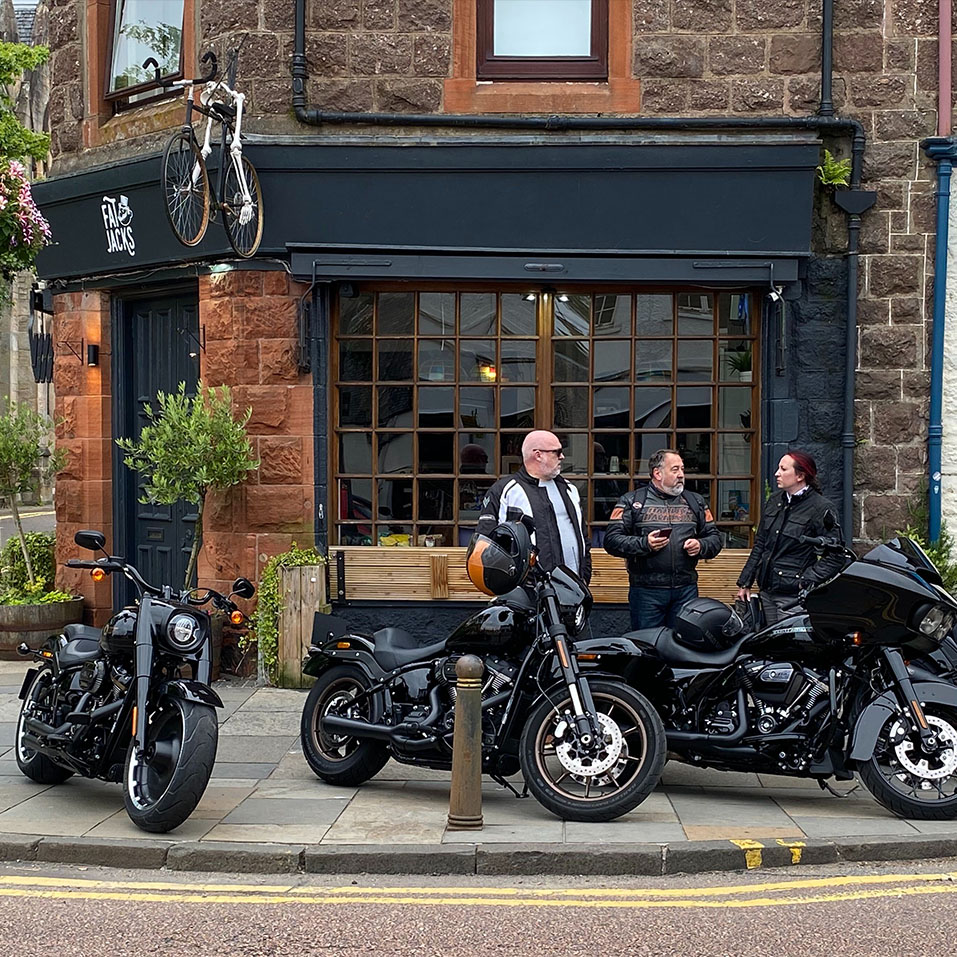 It would be an understatement to say the weather sure has been changeable the last few weeks, but we’ve still met some great riders from all over the UK heading to the North Coast 500 and many other destinations. Hurricanes aside, this weekend looks pretty good and we know plenty of you are planning trips and weekend getaways. We’ve broadened our Touring and Rallies section to offer even more great kit and suggestions for your stay-cations. 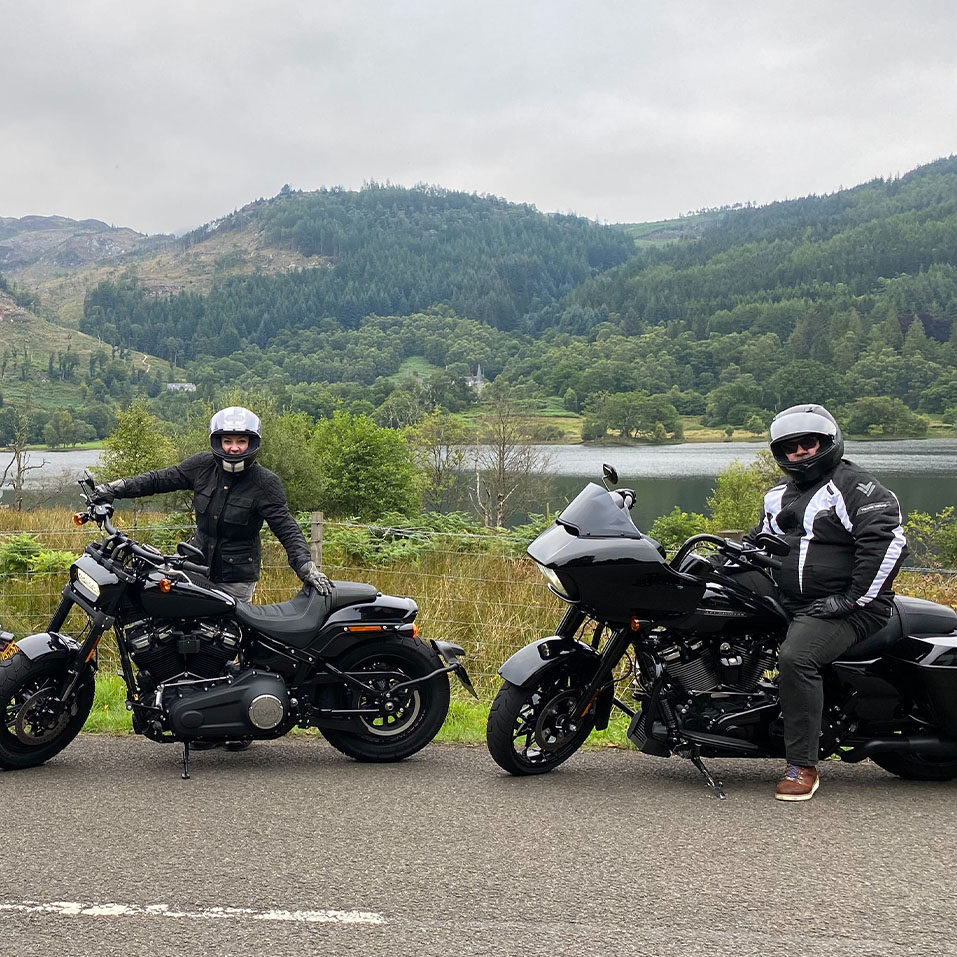 We know plenty of you would have been heading for Thunder in the Glens this weekend and we’re definitely missing meeting you all up there and enjoying a few beers with you in the sun. Last year you may have seen the Livewire on display and even had a shot on the Jumpstart, so we’re thrilled to let you know we’re throwing the UK’s first exclusive Livewire event on Saturday, September 5th.

We’ll be joined by Harley-Davidson UK, their experience truck and several Livewire's for road riding. Spaces are limited on a first come, first served basis.

With Ewan and Charlie set to broadcast their Livewire trip on September 18th, this could be your chance to get a taste of their experience on the road. We’re pretty stoked to be hosting an event at all this year, so if you fancy something a little bit different – go ahead and register here.

Until then we have plenty of new production coming in store over the next few weeks and we’ll be working hard to get them online for you all. In the meantime, enjoy your time in the saddle, and check out our new arrivals right here.